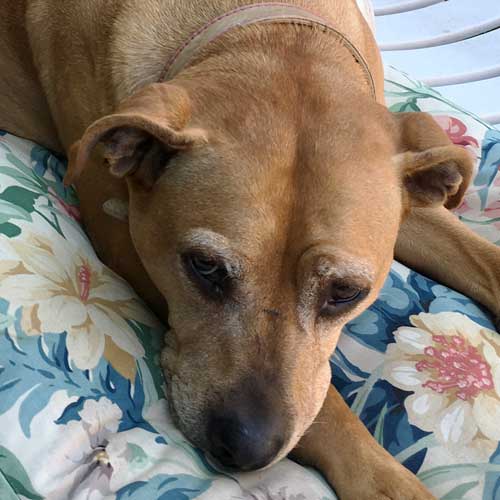 Bella came into the hands of the RSPCA very poorly underweight and having puppies although only 16 months herself.  Her life from a puppy was spent outside with a male dog who totally dominated her and had most of the food.  She was too poorly to have her puppies so they were taken away and 2 months later we adopted her.

Rescue dogs make the most wonderful pets it’s almost as though they know you choose them specially and love you that much more.

I did a weekly diary when we first got her outlining some of her antics and sent to the RSPCA home that had looked after her.  The staff there loved receiving the news of Bella and how she was settling in.

One of Bella’s tricks she got upto really sticks with us.  She managed to get hold of the really large pack cornflakes from the kitchen side and had shook it all through the kitchen and lounge I was not best pleased but she hadn’t realised they were edible I started sweeping them up it was then a race me sweeping her eating!

Because she had never previously been indoors during her first 16 months of life I used to leave her for 10 minutes and pop next door.  One of the first efforts she had obviously strolled around my work top discovered a bunch of grapes and tossed them on the floor.

Another time I had left meat scraps in a basin on the windowsill behind the sink, when I came back all I had was a sparklingly clean bowl.  She had a happy face.

Bella had her share of emergency trips to the vet.

We lost her August 2020 to cancer having reached the grand old age of 13 years.

She’s been a wonderful pet so loving and giving.

I could go on for hours but so many lovely memories.

If you have a Happy Tails story about your rescue animal, please send information and a photograph of your special friend

Send In Your Happy Tail

We loved to hear about your beloved companions.  Send in your rescue story and you might get it published.  Don’t forget to include a photograph.